Well it had to happen eventually, we’ve got our first British Cartographic Society 3D Special Interest Group (or 3DGBCS) meetup coming at the end of March, hosted at the Ordnance Survey offices.   Nicholas Duggan has been leading this and will have finalised the details shortly, be sure to keep an eye out for it on social media as well as here. 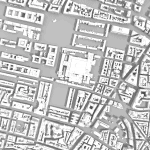 Now on to more news: we’ve had tremendous support in setting up the 3D Group and we want too extend this.  As such we have setup an award specifically for 3D cartography of any sort from any industry or profession.  This bit is important really as the term 3D can be all encompassing and we didn’t want to limit who entered, you don’t even need to be a member of the BCS.   In our work we’ve seen representations of the world in 3D from many industries just look at the entertainment industry for a wide range of 3D technologies and let’s be honest mapping/cartographic techniques.   In urban planning and architecture 3D representations of the world around us provide important context for proposals.  With smart cities a 3D basemap is considered integral to the bringing all this city data together.

The first annual 3D Cartography Award Sponsored by GD3D® the 3D geospatial brand from Garsdale Design, is a new exciting award open to everyone in any industry creating interesting, informative, exciting 3D cartography (real or imagined) using any technique and/or medium!

Currently we find 3D representations all around us, whether it is a web map, a survey plan, a planning visualisation, or even a computer game. This can come in many forms from a simple isometric drawing through to full haptic virtual reality.

We don’t care what industry you are in or what software you use, whether you are a surveyor, cartographer, GIS user, artist, engineer, data scientist, or other, we just want to see your amazing 3D representations and hope the entries will challenge everyone’s perception of what 3D cartography is!

There are many interpretations of what 3D cartography is, so we don’t want to limit entries. We propose an award for an overall winner based on communication of the intended message, legibility, simplicity, visual impact, and composition. There will also be commended awards for those we see as having merit in particular areas, science, statistics, visualisation, urban, natural environment, fictional, and other.

Entries will be considered by a panel of judges, appointed by the GD3D® team at Garsdale Design and the BCS Awards Committee. The panel will include a range of people from different areas of expertise in the 3D data industry. The panel will judge the quality and design of the map in relation to the purpose for which the map was produced.
The winning entry will be announced at the BCS-SoC Conference in September 2018. The award comprises a crystal trophy to be retained by the winner and a certificate. The winning entry will be put forward for the BCS Award. Those commended will receive a certificate.

All entries will be exhibited at the BCS-SoC Conference and the winners will be published in The Cartographic Journal and on the BCS website following the Awards Ceremony.

We don’t want to limit the entries but as guidance below is an example list of entry types. This list is not exhaustive, and the judging panel will consider other formats as appropriate:

The entry form is available here.