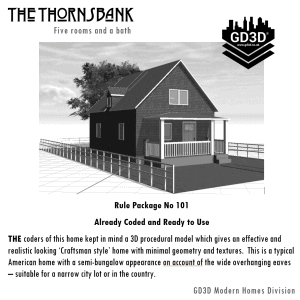 This all started a while back with an interest in American houses, specifically the ‘Craftsman’ style homes which you could buy from places like Sears of all places…. As an Englishman I’m not fully versed on all North American architecture but this idea of picking elements of a house from a catalogue seemed like something I should look at doing in Esri CityEngine.

So that’s what I did.  In classic CityEngine professional style my first attempts got very very complicated as I added more detail (you’ve seen the nice renders of these for a while now on this blog and even the banner here, I really really like them).  The second attempt I produced an all singing all dancing rule file to create thousands of different ‘Craftsman’ style house typologies.  The trouble is, without a big PC and a good understanding of CityEngine these were only going to be usable by those of us who sort of know CityEngine in a professional capacity.  This is always a problem I have with CityEngine much like Alice I often go deep down a rabbit hole and get lost in the wondrous and slightly crazy detail (it’s not a bad thing just a bit distracting!).

The end result on my third attempt is something very much simpler and easier to understand and something that can be wrapped as a Rule Package.   As a Rule Package it can also be used in ArcGISPro too.   I’ve initially conceived of this rule file as primarily use on auto-generated Lots in Esri CityEngine (those are created from centre lines of roads forming blocks), but I can make it work on points and footprints too (just not on the first release).   In CityEngine you have the nice ability to use the handles feature to interact with the model without having to muck around with the attributes in the inspector.  Here I am finding it quite tricky, which attributes are important to have as ‘handles’?  If you do everything the model becomes cluttered, so I am going with a ‘less is more’ approach to see how it works.

Okay enough already! When is it released, and how much will it cost?!

I’ve got a beta trial coming for this which I hope some lucky few will help me iron out the kinks.  Then I’ll look at selling it, my thinking is Rule Packages get sold cheaply (less than £50 probably) but if you want the source code naturally you have to pay more, and it’s this price I’m struggling with.  perhaps others can suggest an approach?

If you want to be part of the beta leave a comment below, or register on our new web forums (not just CityEngine but all 3D stuff) and head on over to the Thornsbank specific forum page.

I end this post with some additional screenshots of the rule working in ArcGISPro and a CityEngine WebScene.