Ok first up not all gadgets are trivial, in particular I don’t believe play is trivial (shameless plug for previous post there, apologies).  Recently I tweeted a that we (in my office) had purchased a geodesign gadget.   So you’ve now got two or three questions haven’t you?

Let’s try and answer them (apologies for another big post)…. 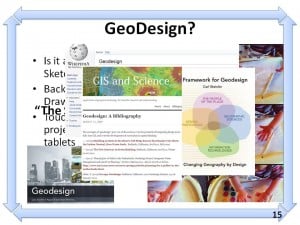 What on earth is geodesign?!

Let me quickly summarise what geodesign is for you, firstly it’s important to know that I think most people would say that geodesign is not new, far from it.   However the technology that enables us to combine methods of design over and get instant feedback from geographic data and modelling has dramatically changed in recent years.

This is all about the merging of two often separate processes in many projects and speeding up the iterative processes.    In simple terms think of part of geodesign being about design without always having to switch on an underlying layer of data to make adjustments for it.

Technology is allowing our design work to get instant feedback from underlying data without having to switch things on and off.   Well that’s what geodesign means to me, feel free to comment if you have more input.

What’s the gadget? (the unpacking and installing process)

The gadget is this the Wacom 24HD, no not the touch screen, this is not particularly new technology it’s a big screen on a nice adjustable stand which has a built in digitizer tablet that allows you to use a specially battery free pen to operate your programs with.  It allows you to do freehand drawing directly onto the screen

What many of you probably don’t realise is operating systems such as Windows have had built in ‘tablet’ functions for a while, in fact I was using tablet PCs in my local government planning job (Windows XP), when the Planning Portal was in its early days (we wanted to stop printing stuff out).

So let’s have some photos of me and my fellow colleague (okay he’s my dad as well) unboxing the thing….. blimey.  It’s big and heavy.

We opened it up and looked at the thing (geeky I know but we were admiring the packaging, stop rolling your eyes!), then we looked at my colleague’s desk, erm he has two monitors already and lots of paper and ‘things’ on his desk.    We needed to think about this, you see if you’re going to use this device you have to understand or have a vision about how the user likes to work.   So the first stage was to clear his desk remove one of the monitors and position the tower PC somewhere it could be easily accessible for cables and the like (who hasn’t positioned their PC nicely only to find the cables aren’t long enough?!).

Now to continue unpacking the device and place it on the desk.  Trust me when  I say this but you will need two people to move this thing, yes you could probably do it on your own, but then you’re running the risk of dropping it so don’t.  Follow the packaging’s advice on carrying it then there won’t be any nasty surprises.

Once in place on your desk sit in front of it (or the user) and just make sure you can move the thing to positions that might work for you.   Good?  Okay now you can plug it all in (monitor cable, default DVI, power cable and USB).

Now to install the software, I’m sure if you follow the instructions for most people it will work.   I forgot however to uninstall the previous WACOM inutos driver and software.   We had major issues here with getting it to work.   The screen worked as did the pen sort of but the pen was acting funny and positioning the mouse cursor offset to where you put the pen.  The solution was to uninstall all Wacom drivers, then use a registry cleaner to remove broken Wacom links and then to download and install the latest drivers from Wacom.  After that initial (okay 1 or 2 hours) of panic, it has worked perfectly.

Why do I care?

Well if you’ve come this far in the post I’m guessing you’re actually interested in why we’ve bought it?   Basically I came to the conclusion that our in-house processes had been relying upon paper too much.   Any stage that required freehand stuff like sketching or working out designs seemed to happen on paper, get scanned then somehow end up in digital form through me digitizing it or shoving it into Photoshop.   I know this process happens in many offices like ours and part of the problem is that we have become so used to thinking the mouse is the easiest and quickest way of using and designing with a PC. Except that it really isn’t, think about all your work process in a day, now think of the truly creative ones often when you’re just starting to have ideas.  Are they on PC or pen and paper?  I bet many of you will say pen and paper.

I want to minimise the start stop effects of using paper and so work can be passed to other people and use in different ways easily and without delay.

We’ve had the Wacom 24HD for about one week now, and my colleague has used it mainly with ArcGIS as part of the design process for an urban area in one of our master plans.   Previously I would have to liaise with him about what data in some GIS layer he wants and digitize it (I’m quicker with a mouse than him), then he would print it out to scale and with some nice tracing paper he would do some quick sketches and designs over the top.   I would then scan the tracing paper sketch in, georeference and then digitize it in ArcGIS.

It works exactly as you think it should for the most part, suddenly some of ESRI’s interface choice’s and tools make sense.   I would recommend looking at your toolbars again and making them easier to access.   There’s also a tablet toolbar for sketching, which creates graphics you can convert to features, it’s not perfect but you’ll want it to do more so you can use it.   You will also want to configure your most used functions onto the Wacom, we’ve programmed a button for undo, and a button for pan (you can configure any combination of keypresses it seems with the Wacom).   These buttons can be configured on a per application basis so don’t worry you’re not stuck using one set of key shortcuts for other programs!

He’s already more confident and quicker with a pen (he was taught architecture and urban design in the 1960s).   This method has encouraged me to correctly setup up proper editing feature templates that he can use quickly and easily.   I’ve not had to help with any digitizing and he has got much quicker creating the GIS layers he wants.

Our next challenge is replicate the freehand design process, my initial idea at the moment is to use Illustrator (CS5) and create an A3 document, then place in the document a jpg export form ArcGIS of the map area he wants to design for.   Then create edit layers to draw over the top of the map.   Okay this reads like two steps forward and one step backward approach so far.  For instance he probably should be doing all his designs directly in ArcGIS.   Well maybe he will but for the moment replicating a pen and paper experience is a step in the right direction, we use Adobe CS5 in many of the projects we work on so it’s not a steep learning curve.  Allowing him to choose nice artistic brushes gives him the comfort and artistic freedom that is sometimes required.   Me making him use Illustrator rather than photoshop means that I have vector line drawings to work with that I can get as AutoCAD formats for consumption in ArcGIS (yes I still need to georeference, but I’m looking at automating some of this).

How does this fit in with the geodesign concepts?  Well it’s all about hiding the technology and ensuring that design is a smooth process.   Pen still feels natural, and being able to draw directly onto satellite imagery has a powerful effect on the process and keeps us much more in touch with our data layers.

In conclusion we’re all very excited by this big tablet it is expensive, but I know we’ve already saved some money in one particular job by speeding up one quite time consuming process (digitizing a largish urban area using background satellite imagery).

Now we have this device some key ArcGIS tools might start to be used more, for example, the one that allows some instant feedback on polygon areas being plotted as you are editing (see the Dynamic Charting tool).   Often when designing we will have a target area we need to get to and keep to, this in conjunction with the tablet will help us.  I also want to get my colleague to use some of these new toolbox tools I’ve created in model builder.  So when he wants to start a new edit layer with our standard symbology layers (and set attributes) I don’t need to get up and help him.  All of these will help us and ulimatley I’m trying to make sure that when he sketches a road I can literally without further conversion import that into CityEngine and make a 3D model out of his initial sketch.

CityEngine and this Wacom 24HD gadget are making me want to raise our game considerably, and making it easier to do our work is the first step.

One last thing and I’ve probably said it before, but I believe I am one of a generation of people who learnt to use a mouse and keyboard to do creative work.  Look at the generation behind me (my parents) who were taught to draw and communicate with a pen, now look at the next generation (my daughter) who use tablets without a problem.   I believe the mouse and the keyboard are a small blip in the development of technology for the workplace.   Who needs eye hand coordination for mouse control when you can directly interact with your PC or tablet screen?