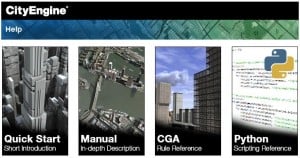 Today sees the release of CityEngine 2011, recently acquired by ESRI and being integrated into the core of their software offerings.   This package fits in nicely with Jack Dangermond’s ideas on GeoDesign (you can also read more here).   The ESRI user conference in Madrid today will be when it is officially released, but what will the new release contain and what improvements will ESRI bring to the table (aside from some cosmetic changes).

Well I’ve noticed that the help file for the new version is online and you can find it here.

New features I have spotted so far include:

You can also visit the CGA change log for a more thorough breakdown of what has been added, changed and fixed.
There also seems to be a number of interface changes, which look to make the process of linking to rule files, selecting start rules and the like easier.   The inspector window has undergone some cosmetic changes, not much but I think some the people at Procedural/ESRI have been trying to ensure consistency and a clearer interface.

I’m glad there’s is increased support for GIS file formats (namely KML and GDB) but I haven’t managed to find out whether object attributes set in CityEngine are now automatically written back to a shapefile upon export without the need to dive into Python scripting (which is only available at PRO level).  I really hope it does this for the versions that can export to shapefiles as it is in my view a hugely important feature essentially for working with ArcGIS.

In summary this looks to be what I was hoping for from CityEngine, a refinement of the interface and increase in support for proper GIS georeferenced data, plus enhancements to the way streets and lots are created.   Until I get the new update I can’t possibly comment on the software’s real life performance, but the future looks very promising.

One thing I hope ESRI doesn’t do is fragment the product too much (i.e giving a small, medium and large approach with huge feature differences between products).   We use ArcMap (lets call it ArcGIS for cheapskates) in the office  and increasingly QGIS seems like a much better alternative in some circumstances, as the feature set is much richer and it’s file format support better than ArcMap.  Yes I know we should pay more money if we want the features, but honestly that’s not always possible.