So it looks like CityEngine 2017.1 is soon to be released (it gets released for Partners a little earlier!) and wow have the team in Zurich and Redlands been hard at work!  Of course there are two headline features

It looks like the Esri team are making good on their promise of making CityEngine into a true geodesign tool of great value to Urban Planners.  There are a lot of enhancements and bug fixes

Among the new CGA functions I think the interesting on of mention is the new annotation attribute @Enum and a change in how @Range works we can also restrict the values (so you can’t as a user override these values in the inspector!).  This allows for a more defined set of inputs and makes the inspector much easier to read and interact with. @Angle, @Distance and @Percent do what they say and I think go some way in making people who author rule files (like myself) make easier to use tools!

One improvement I’ve noticed is that that the Scene Layer Package export function has been improved to make it what Esri call ‘Smart Mapping-ready’ basically it means attribute information is written to the scene layer package which makes it nice and easy to change colour by values in the online scene viewer. 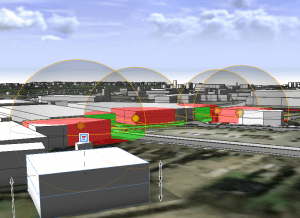 A big thank you to the Esri engineer who fixed the bug in the FGDB export that meant previously imported feature classes retained memory of their old names when exporting!

Finally a reminder this release CEJ files (CityEngine Scenes) are not backward compatible with 2017.0!  Take my advice, use a new workspace directory per CityEngine release and copy old project to the new workspace so you don’t run the risk of damaging your work!!

For a full list of what’s been changed you can look at the CityEngine 2017.1 release notes.

Have a view of the CityEngine’s new youtube videos for a bit more on the viewshed and corridors in 2017.1: