I’ve been busy since I got back this is the first time I’ve had a quiet slot to write it all down… If you don’t understand my post, just know I’m a terrible proof reader.  Consider my blog posts a brain dump rather than considered essays…

On the flight to Munich I read the inflight magazine, here the CEO of the airline apologised for the lack of a high speed rail linking the airport with central Munich, as a German was saying this I was expecting something awful (every German I have known has understated things).

Yet arriving into Munich airport the transport into the city centre was clean efficient and cheap. Well 30 minutes seems high speed to me, I mean have you landed at Heathrow and tried to get to central London recently?

Getting to my hotel was refreshingly easy and only a short walk. I always love to walk at least one block about my hotel in any city I am in. Walking is the best way to know a place, take any mode of transport and you lose the feeling of terrain and that is one of the key things I like to know in city centres. (am I up the hill or down the hill?) It also helps to know the lie of the land for the walk back home from the pub…

After checking in I went for a wander into central Munich (taking photos of street furniture to model in SketchUp and CityEngine), the weather although autumnal was wonderfully warm and certainly welcoming for the outdoor drinker.

Okay I didn’t have this section in my post originally, basically because I forgot…

Jack as usual was on fine form introducing and discussing his vision, a number of hightlights stood out for me, the question of satellite imagery coverage ESRI truly are a content provider, an increased coverage will keep people like me hooked to ESRI products for the foreseeable future (which is the point).

Stop Talking Start Planting campaign had a presentation, I got mixed feedback from attendees about this, yes the young lad was confident (far more than me) and it was an impressive presentation as well as a worthy cause.   I guess from my cynical British perspective I wished it was toned down more and I hoped he would perhaps enjoy his childhood a little more rather than worry about the awful mess some of us adults have left the place in…  nevertheless planting trees is a good start.

Gert’s presentation demo this forthcoming 3D globe, forget small webscenes, how about massive 3D cities hosted in the cloud and served by ESRI on it’s 3D globe via a plugin free browser.   This is the future make no mistake.

Other presentations included a live demo of the Event processor using a port (Hamburg) as an example, as well as a not very uplifting but very good presentation from Professor Mojib Latif on climate change.   I can’t write about all here but you an look at the keynoters here.

The room was packed clearly people attending were sold on the idea of 3D! Sadly there was no ’round table’ to be seen. The presentation was always meant to be a bit ‘tongue in cheek’, so I had started early stating that no one could make a 3D city model faster than me… quickly realising Eric Witner and Gert Van Maren from ESRIand Antje from SmarterBetterCities were in the room.

A quick jokey back track as to my boast hopefully mitigated my sinking feeling, as some of the audience clearly weren’t feeling my slightly sarcastic/jokey tone. If you know me well you will know that’s pretty much me, so apologies for those who didn’t get it. To be fair the point was that nowadays we don’t have to put so much time and effort into 3D modelling that we did 2 or 3 years ago… CityEngine has dramatically changed all that. My presentation literally was look how fast we can do 3D and look what CityEngine can enable us to do. If you are regular reader of my blog you know I’m genuinely passionate about CityEngine not because I am paid to be but because I have seen how damn useful it is.

So did the presentation go well? I think it went okay, many people approached me after the session who seemed to like the practical take home aspects of my presentation. I did get a couple of comments saying it was a good sales pitch for CityEngine. Clearly if I want to be taken a bit more seriously I’ll have to tone it down a bit. My presentations come from the this feeling that I find all too often the sessions I attend are highly technical or academic and with not enough practical simple explanations. We’re not all experts but we should help each other out if we think a particular method or workflow is useful! Sure impressive technical demos and academic theories are great but you have to know the audience will understand it all.

Conversations I had often revolved around 3D model creation and CityEngine, I got the feeling there is slowly gathering a momentum of interest in this CityEngine stuff (finally!).  I think people are also starting to look at the genuinely useful applications for 3D, it’s no longer a gimmick.

If I’ve missed you out get in touch with me, it’s not intentional, I just have to draw a line somewhere, and this post is already too long!

I had many ‘takeaways’ from this conference, but I’ll stick with two that stood out for me:

3D and the race to the middle

Yes 3D, 3D and 3D, ESRI know they’re on to something with CityEngine especially considering the increased urbanisation the planet is going through. They’re struggling to get the message out, namely because the learning curve for CityEngine is quite steep. They need more training and more development to make CityEngine simpler to use. The 2013 and 2014 versions of CityEngine will start to address this. The trouble is if a competitor like Autodesk created a similar functioning product with training and an easy to use interface ESRI would lose. I don’t think that’s going to happen though.

3D clearly is going from pretty pictures to useful data and analysis. ESRI and people like Autodesk are racing to join the BIM world with the GIS world. Each coming to the arena from a different domain. Whoever will successfully join those two worlds really will dominate the future BIM/GIS worlds.

The trouble with ArcGIS Pro

ArcGIS Pro looks to be a great product, but the ESRI team isn’t on message about what it is for instance:

Call it what it is, the next generation of ArcGIS desktop: a 64Bit, 3D handling modern program that takes some of the complex menu’s out of ArcGIS so you can actually find the useful tools. It gives ESRI the leg up it needed into a more flexible and powerful world. It also allows old and new users to get to the tools quicker, whatever you may think of context aware ribbon interfaces, they are useful. Not everyone wants to remember which menu heading they have to go through only to find that the tool you want to use can’t be used in that particular context….

How many of us for example have found a new feature of ArcGIS that’s been there since 9.3? My blog attests to that, with the post about copying from an attribute table to Excel receives the most hits!

One thing I know for sure is that I’ll be using it a lot when the beta comes out, it handles 3D. San Diego’s ESRI UC map gallery is going to be radically different in the future, this is a good thing. 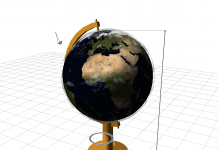 Making a globe and stand in CityEngine 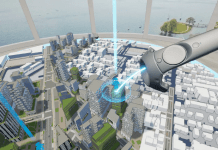 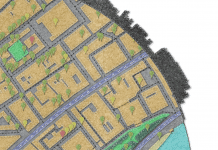