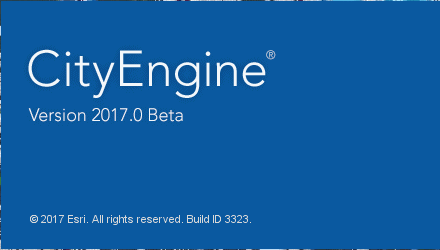 It’s that time of year when Esri start to roll out test releases of CityEngine yay!   Now that CityEngine 2017.0 has switched to a Beta release I can do some limited screenshots and discuss what’s coming in the new release.

This is a big release and it’s never been a better time to jump onboard the CityEngine, procedural urban modelling, and geodesign train!   A refreshed interface, new scenario functions and an upgraded Dashboard for all your model metrics, to name a few improvements and additions.  For those who already use CityEngine on a daily basis, did I mention the new measurement tools, often rumoured to be ‘in development’ but now are actually here?!

It feels like they are actually now making a tool for urban planning professionals rather than the media industry.

Overall, this already as an early release is stable enough for me to do work.  The Esri R&D Zurich gang (and some in Redlands I guess) have done a really really great job of polishing this up and introducing long awaited features.

It feels like they are actually now making a tool for urban planning professionals rather than the media industry. At Garsdale Design we’re a big advocate of this Esri tool, its great for  bringing all that 2D and 3D together.  Helping you to make a cohesive analytical designs and iterating quickly through urban planning scenarios.  Did I mention we offer comprehensive training for CityEngine at our offices here in Cumbria or ‘on site’ at client offices and even at EsriUK’s offices at their headquarters? (apologies for the shameless plug but hey we have to pay the bills!)

Here is a couple of screenshots, there will be more to come but I can’ share with you everything all at once.