Home 3D Sedbergh and District The Fallen of WW1: A Cartographic project 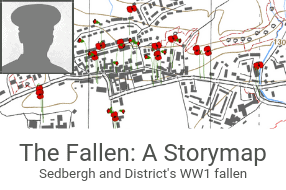 Over the last few weeks I’ve been working on some custom mapping for a range of products (digital and paper) to commemorate 100th anniversary of the end of the First World War here in Sedbergh.

It started with my experimentation of using ArcGIS Pro and the Ordnance Survey’s fantastic Open Zoomstack data product to create ‘fantasy’ type maps.  I soon realised that there was more I could, do and with Remembrance day coming up I had an idea.

What if I recreated those old Ordnance Survey (6-inch maps) using modern data and symbolise the natural features of the area as some kind of trench and barbed wire network?  This would represent the deep routed effects war had on the community and highlight the ‘battlefield’ of home, whether that be loved ones not returning, or returning not quite the same, and the ripple effect it had on the valleys around Sedbergh.

I started by making a basemap I could use in a printed product (a series of A1 sheets), but quickly realised this nice looking basemap (derived from OS data) could be used in some nice digital mapping.

Staff at Garsdale Design had been involved in the ‘Streams of Remembrance’ display in St Andrew’s Church in Sedbergh and had a list of names given to them by Sedbergh and District History Society.   What I’ve done with this is create a geographic point file of where all the soldiers lived and their biographical details, then I constructed a web link to feed their details into the Commonwealth War Graves Commission website so you could click on the link and find where they are buried.

My feeling was that more viewers can relate to an age than they can to rank, status or anything else.

Symbology – I’ve wrestled with this for a while, I knew each soldier had to be represented by a poppy symbol of some kind.  Was age important? Was rank? Was where they lived or died significant?  I could not and did not want to answer, every death is a tragedy and significant.   I did think however, that age might be a good way to group these people in the storymap.   My feeling was that more viewers can relate to an age than they can to rank, status or anything else.

So I drew some poppies, single flowers, flowers on stems, and finally I settled on a collection of symbols.  Single poppies when close together overlapped too much and you couldn’t make out individuals and I didn’t like it.  I tried resizing the poppies based on age but was unhappy… so I asked for help.

so I asked for help.

After much deliberation I reached out to Kenneth Field**, if it’s one thing that those who know Ken would agree on is that he has an opinion!   I gave him some background and asked for advice on displaying the poppies, I won’t repeat all of what he said (it was long and very kind) but basically my idea of sizing based on age was brought into clarity when he said:

…you could ditch age altogether. Is it important in the context of the map? Isn’t the fact each poppy locate a fallen soldier enough (mass of poppies = more in this sense cognitively). A larger poppy might also be seen as being ‘more important’ because it’s more visible. Is a soldiers age relevant to their ‘importance’

A poppy at various life stages is an interesting and beautiful thing.  I liked the idea and in the end after much thought I used all the symbols on my map (with the bottom of the stem being where the point is on the map).  Each poppy symbol would be distributed randomly, age would not be a factor, this also allowed me to avoid some of the overlapping symbology issues I was having.  I know it’s not perfect and the image above looks a bit too delicate, but I think I’ll never be truly happy with any solution.  Artistically I like this compromise the best.  An unexpected outcome is actually the 3D view of these poppies looks much better than the 2D.

I didn’t want to write so much in one post, I do have a technical blog post about the making of this coming as well.   I’ll end by saying I’ve created a number of maps paper A1 sheets, 2D webmap, StoryMap, 3D Scene, and a custom 3D mApp using the Esri JS API.

A link to the StoryMap and 3D mApp (this custom app allows you to get screenshots of an area and download them with a custom title) are ready and linked here below (click on the images).

** Shameless plug but Ken’s book “Cartography.” it’s a valuable resource for those who want to make better maps. 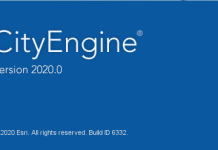 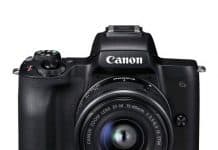 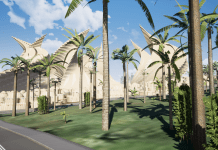