Well it finally happened!   The the very first informal meeting of the 3D Group a Special Interest Group of the British Cartographic Society took place after the Esri UK annual conference.

Both Nicholas Duggan and myself are co-conveners of the group and whilst we both work together he is based in Southampton, Hampshire and I am based in Sedbergh, Cumbria.   We often meet in the middle at conferences and the EsriUK conference happened to coincide with the formation of the 3D group. 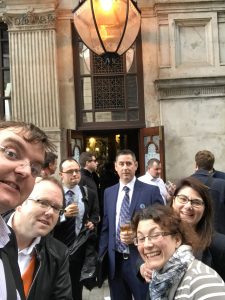 I have to be honest there wasn’t too many people in attendance but that didn’t matter this was a social thing rather than a serious meeting.  It was good to see some familiar faces though.   We stood outside the St Stephen’s Tavern in Westminster (a couple of minutes walk from the EsriUK AC venue) and chatted about all things 3D and map related.

Nick and myself reiterated our commitment to further the world of 3D mapping and helping others with some of the challenges it presents.  We see the group as open to anyone (from anywhere) with an interest in 3D mapping whether that is scientific or artistic, professional or entertainment our feeling is that we need to start learning from each others professions and industry’s.

Here’s a quick example of what I mean by learning from each other’s industry’s…. When I started visualising our GIS data in 3D there were questions on how best to represent the non-physical world which have a location to them.  For example demographics of households or income levels.  Methods of representing this in 2D are fairly well established but I felt ability to view data in 3D somehow changed things.  For one thing the end user can views this data from multiple weird angles I would never have chosen!  I’m not saying 3D visualisation is a new thing, but it was new to me at the time.   Then I remembered someone had already done this but not as part of some professional GIS system or scientific mapping.  No, I remembered the game SimCity had been doing this for a while… 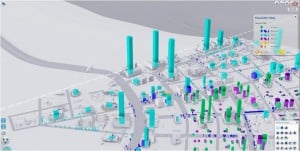 White buildings with coloured bars in 3D, a gaming company had come up with a very effective technique of visualising all sorts of data in a 3D environment over a city scale.   Ok not a brilliant example but I hope you get my point…

There are many traditional ‘professional’ companies running headlong into Mixed, Augmented, Virtual Reality, and gaming technologies all struggling with the same issues, data sizes, data visualisations, z-fighting, textures and more.   Now more than ever we need professions to come together and help each other.  We shouldn’t have to reinvent the wheel.

We plan to have an official 3D Group meeting at the British Cartographic Society’s and Society of Cartographers Annual Conference in Durham on the 5th to 7th of September.  What day this will be we don’t know yet.   We’d also like to hold a couple of meetups in places other than the usual suspects so north and south.  If you have an idea on where to hold these drop us a line.

We’re also looking for more people to be involved!  You don’t have to be a member of the BCS (although it would be nice), so get in touch with us.  We are hoping to set up a online forum somewhere as well, but until then Nick (@dragons8mycat) and I (@elliothartley) are on twitter and will try and use the hashtag #3DGBCS

A little bit about the 3D Group :

The 3D Group (3DG) is for anybody interested in the exciting world of 3D GIS and cartography. Real or fictional, proprietary or open, science or arts, we aim to promote discussion on the challenges and opportunities that new technologies (hardware and software) are bringing. We’re hoping to attract more than just GIS professionals, programmers, and cartographers to this group. The broad subject of 3D intertwines with several industries, we also want to bring in entertainment industry professionals, architectural visualisation specialists and more. Professional tools and technologies are blurring the boundaries between the worlds of entertainment, architecture, planning, GIS and cartography. Let’s learn from each other and provide help to those who are eager to learn. If you work with 3D software or technologies join us. We aim to hold 3D events at least a couple of times a year, provide training days and we welcome discussions online via social media through the hashtag on twitter of #3DGBCS. The Co-Conveners of the 3D Group are Elliot Hartley and Nicholas Duggan.

ArcGIS CityEngine 2021.0 : What’s New and Should you download it?