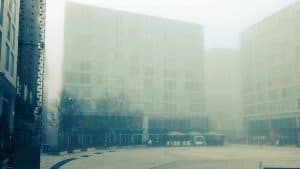 Last week I attended and presented on behalf of Garsdale Design at the Transport Systems Catapult (TSC) 3D cities event in a foggy Milton Keynes.   This was a “one day opportunity to collaboratively identify challenges and showcase solutions” and “gain insight into virtual/synthetic testing for transport”.

TSC have been having a conversation with us about modelling 3D urban environments using procedural  technologies found in Esri CityEngine and integrating those models in Unity.    I have to be honest though, I was initially concerned about focusing on this negative idea of ‘barriers’ as all we see is opportunities here at Garsdale Design!  However, here was a gathering of people from a variety of industries who understood what it meant to actually make 3D city models and use them in commercial contexts.

The session had some key aims, firstly to understand what a variety of people were doing to create 3D cities, secondly to discuss some the hurdles or barriers of city creation (and publication) and lastly to have ‘round-table’ discussions to identify some of these barriers and how we might overcome them.   Have a look at who came and presented and you can see we had some very interesting presentations! 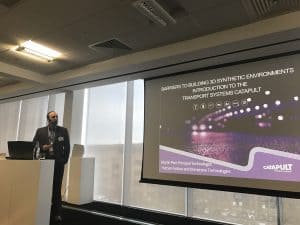 The event started with an overview of who they were and what Transport Systems Catapult were working on and with.   Catapults as I see them are there to fill the void where companies like ourselves can’t explore or experiment with technologies.  With the best will in the world Garsdale Design hasn’t got unlimited resources to ‘play’ with all the exciting new technologies coming through! 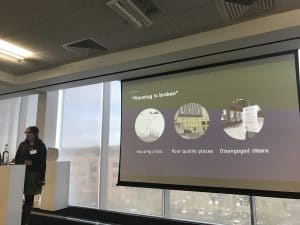 Following TSC was Future Cities Catapult who have a different focus to TSC, and you’re not the only one wondering why FCC weren’t hosting this event!   They covered what they do and their current focus on fixing what they perceive as the ‘broken’ planning system here in the UK.  Now as a planner I can see some of their points but I can’t help feeling their inclination to focus on technology rather than the legislative and planning process itself may through them some issues!

The Satellite Applications Catapult, talked through some the areas they are exploring to do with remote sensing, but I’m afraid that as can happen to all of us technical issues with their presentation ensured I didn’t totally follow them. 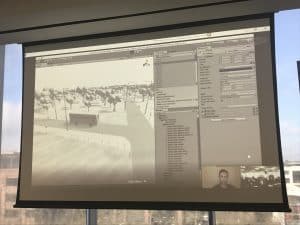 MantleTech who produce a Unity a ‘push button’ plugin for generating city models from 2D GIS data was next and via a Skype session from Australia!  It shows you what you can do with reliable internet connections and speeds!  Their solution is interesting as lots of people and professions use Unity as a way to create virtual worlds (real or imagined).  In fact TSC is using it for their own simulation environment.  I can see why as well Unity has a low entry cost point, has lots of support and plugins too!.   MantleTech’s technology is about bringing in data from places like Mapzen, Mapbox, OSM and OS, with that data a procedural model based on the underlying data is produced.  This means can you create ‘templates’ or ‘themes’.  Because it is in Unity you can then model vehicles to move around the environment.  It’s all very slick and feels a little bit like CityEngine in places! 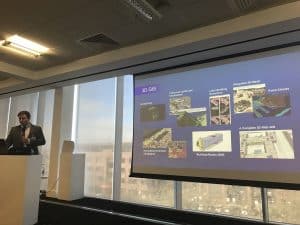 EsriUK presented on their location platform and kindly mentioned our work and services!   They gave an overview of the new 3D capabilities and showed a video of the amazing stuff you can do in ArcGISPro.

The presentation finished with a run down of the BIM capabilities of the platform to. 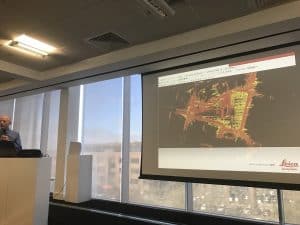 Leica’s (Leica Geosystems which is part of Hexagon Geosystems based in Milton Keynes) presentation showed off some their amazing kit used to capture the environment.  In fact MK Surveys have used this to collect data of Milton Keynes for use by us and TSC. 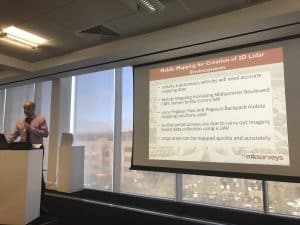 MKSurveys presentation was on the creation of lidar datasets by mobile mapping and their experience of using these mobile lidar devices in the field.  The amount these guys can capture in one day and then process in another day is incredible.  They can also prove they’ve saved weeks of site work as well as reducing health and safety issues on the work like the A1081 Luton project.  One area they did talk on which would interest my colleague Nicholas Duggan was their regular survey of the Silverstone Circuit imagine having the latest lidar hardware and then being able to test it on a race track.   I didn’t ask whether they could attached these devices to supercars….   After the survey MKSurveys uses a variety of software to process the data for clients.

Garsdale Design’s contribution followed some highly technical insights. We’re used to dealing with the realities of juggling massive and varied datasets and making them useable.  Recently it’s the Esri platform that fits for us.  My presentation was clearly in reference to cartography with the title “The Art & Science of 3D Cities”.  My abstract was as follows:

Small areas with a lot of detail or large areas with a little detail?  Despite digital 3D urban models being seen everywhere from games, to movies, planning/architectural visualisations, and applications like Google Earth.   Creating 3D urban models with a geospatial element is not as easy as some might think.   The industry is always trying to answer the question with things like meshes, point clouds and gamification but is it working?

Firstly, a detailed understanding of what is meant by a 3D model is required.  levels of detail (LOD) and accuracy need to be assessed against levels of effort as well as the equipment and method of capture available, with the end user being always in mind.   The ability to bring geographic datasets together with fictional datasets poses serious questions (legal, technical and ethical) for those in the 3D urban modelling business as the line between a scientific decisions blurs with the artistic and aesthetic choices we make. 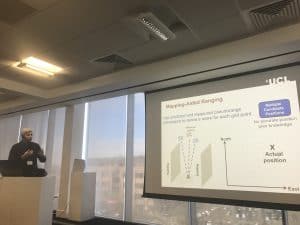 UCL’s presentation on Intelligent positioning within 3D environments was all about how to improve the accuracy of positioning technology (GNSS for example) in cities where reflections and interruptions of signals can cause issues for positioning hardware.  Their work on modelling urban environments helps to improve their positioning algorithms.   Lots of practical applications for this work and I would have thought increasingly important considering technologies things like self-driving cars are coming. 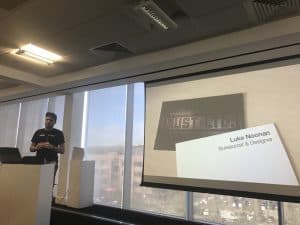 A game developer called Rust Ltd presented on their modelling of city environments as well their use experience developing for new hardware like the HTC Vive.   Obviously these new VR technologies pose challenges for how games are designed and how interfaces are designed.   They’re clearly doing some very interesting stuff and I really enjoyed chatting with Luke Noonan during the roundtable discussions later in the day. 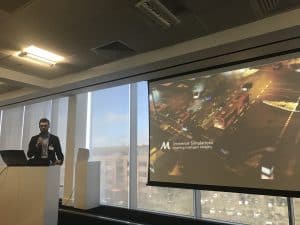 Lastly a spinoff from TSC presented, this company called Immense Simulations  are doing some amazing work simulating traffic simulations based on a variety of data inputs.  They had a very impressive demo showing simulations on top of the Cesium platform.  I like the simulation of two competing taxi firms, but wondered what happens in the future when everyone ends up using the same software to model and compete for trade… 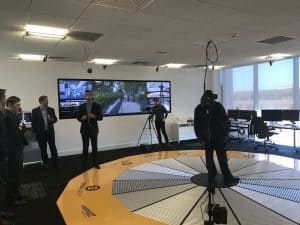 After the presentations was lunch but during this refreshment time a couple of groups of attendees got to see what the TSC ‘lab’ looked like and technology they were experimenting with.  The large Omnideck and adjacent car simulator being obvious highlights!  If you haven’t seen the omnideck it is amazing and quite noisy.  Basically, you plug this all into a big PC and an HTC Vive to physically walk around these modelled environments.  It is quite frankly amazing.

They were also working on navigating environments with different types of eyesight degradation/blindness.  Not just using mobile devices but using an HTC Vive, the main idea here is to ensure people like myself (a planner) understand the design choices we make in the context of people with sight conditions.  This is also an actual application for Android and iPhone built in collaboration with the Royal National Institute of Blind People (RNIB) and you can find out more about it here: https://ts.catapult.org.uk/innovation-centre/the-visualisation-laboratory/eyeware/ 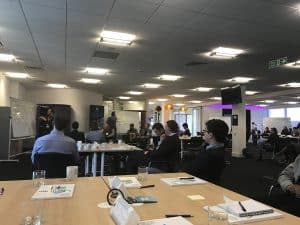 The real interesting session came after lunch, we split into informal groups and hung around tables and white boards each with different questions about 3D city creation and VR and AR.   This was an incredibly useful session for people to interact who had come from different backgrounds, attendees were from diverse industries, gaming, web, survey, planning, simulation and academic.   I’m afraid I can’t give you  detailed notes on all the discussions we had! 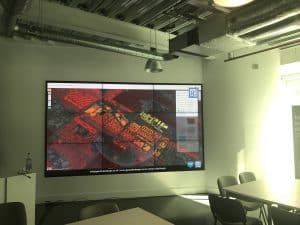 I can’t thank Ryan Johnston and all of the TSC team enough for the inviting us to speak and participate in such an interesting day.

It was great to be given the opportunity as well by TSC to have one of our fun showcase videos on the big screen as well!

Like many conferences and events it’s the discussions with other people that really get my brain working!  We’re looking forward to collaborating with TSC in the future and with some of the people we met last week too. 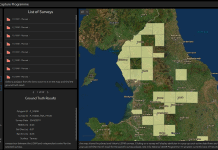