Many of you will know that I’m at the ESRI UC in San Diego this week, hence the tweet and blogfest I’m having.    This is my first large conference of any sort not just a few hundred people more like 10-15000 people (and by that I mean geogeeks and proud of it).   Conferences for me are all about learning new techniques and connecting (or networking) with people.   It used to be you only got to meet them once have some conversations and then wait till the next conference to try and pick up where you left off.   Of course with twitter now many of the people I meet I already know (at least their online persona at any rate…) thanks to social media I have continuity I can still meet new people but my conversation with them no longer stops when I get on the plane back home… 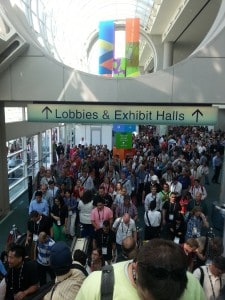 Now where was I going with this post….?  Ah yes you geo-people can be a cynical bunch, more often than not so I am as well.   Perhaps it’s a post-modern rejection of the optimistic 80s thing?  Who knows?!   The trouble is we’re in danger of truly damaging our ability to respond to challenges that present themselves.   If the attitude is always “I wonder why they’re doing that, what’s in for them?” rather than “That’s interesting, I’d like to help out.” what does it say about us?

Conference attendees were told a month or so back that a certain will.i.am was going to be a key note speaker.  Cue the usual cynicism and criticism on the social networks and on regular channels.   The geo-public seem to have a love/hate relationship with ESRI.   Not that I really understand it, but it’s there at every conference.   Underlying almost every conversation and innovation is the the thought “how much will they charge me for that”, I fall in to the trap as much as anyone.   A small company like mine who base much of their deliverables on one company’s product, will be understandably and necessarily nervous.   Yes there is opensource software out there, but sometimes it is just not up to the job.   Some people won’t like me saying that and think I’m hopelessly enthralled by ESRI and should wakeup and embrace the saviour of opensource…. well I’m afraid that kind of attitude is as off putting as ESRI’s confusing pricing strategy*.

So yesterday we got a treat at the plenary in the afternoon, a very strong presentation from a number of school kids working with the i.am.angel foundation.   I must say, I’ve done a number of presentations and seen many more, but how is it the kids they get on to do this stuff look like they own the stage?  If only I had such confidence in front of 1000s of old geo-geeks.   Strong stuff, doing real work that can highlight problems and opportunities in their communities.   Wonderful! 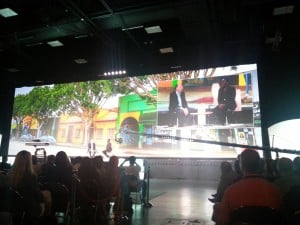 After that the highlight of the plenary we prepared for a chat between Jack and will.i.am, the cynics held their breath ready to tweet every ounce of snarky comments and cynical (yet witty) remarks.  I too was prepared to do similar…. yet as soon as will.i.am started to speak I realised this man was really smart, confident, enthusiastic, kind and actually a very good speaker.  Why was I surprised?  He’s a pop star so confidence he has in spades!   To my shame I think I judged him too much on his career.   He’s not everyone’s taste of music and he is on a god awful talent show on the BBC called the Voice, it has a vaguely interesting premise but otherwise I wish the BBC would get rid of thing, it cheapens us all.   Don’t get me wrong though, I don’t begrudge the man for earning a living!

So what was it that was special about will.i.am?   We’ve seen many confident key note speakers giving equally inspirational talks.  Yet it’s his unique take on education and the idea that he’s in it for the long term not just a four year cycle.   Read the twitter #esriuc hashtag stream for quotes of his, it’s amazing reading. 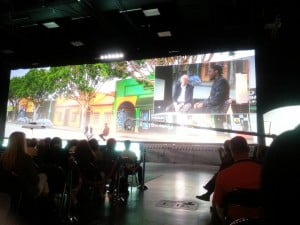 What Jack did by inviting will.i.am is a master stroke, he took the rug away from the cynics for a brief moment and it felt good to breathe some optimism for a change.

So in conclusion I want to set will.i.am a challenge, make a TV show here in the USA and the UK along the same lines as all the crappy talent shows, except the talent being showcased is of real community benefit.  Let’s make the people in society who are revered not those of sports or music, but of science, engineering, computing, geography or mathematics.   There’s so many exciting things going on outside of sport and music we should get to see it more often.   Lastly will.i.am should bring himself as he was on stage yesterday to the public more often, I wish William James Adams all the best on his university path next year (MIT) and hope he comes back again to tell us how it’s going.

Because when you’re lost you need maps.

You can see the video here now on the ESRIUC site

*Since we’re on the subject have your tried out the newest QGIS and in particular the nightly builds of QGIS?!   I have to say it is amazing stuff, I still can’t use it officially in my projects as the client wants ArcGIS compatibility but I genuinley think ESRI should start thinking about giving away ArcGIS Desktop Basic because of this strong challenger..